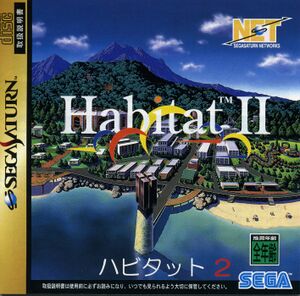 In 1993, Fujitsu had shown interest in bringing Fujitsu Habitat to the west. The plan was to backport Fujitsu Habitat to Windows computers. However, the source code for Fujitsu Habitat revealed major architectural problems and so minimal progress was made on bringing this to fruition. It was instead decided that development efforts would be better focused on writing something from the ground up. The original creators of Habitat, Chip Morningstar and Randy Farmer were both onboard and had already done this once before.

A team in Japan was formed and they received regular code updates and support from the American WorldsAway team. The Japanese team localized everything and even added new features, such as the ability to record your session and play it back offline at any time. This was done by recording packets sent to and from the server and because of the design of the WorldsAway client, it wouldn't be able to tell the difference between receiving that data from a live server or playing back an offline recording.

Habitat II was planned from the start as a way to transition from the FM Towns, over to more modern computers. The initial world setting was custom made by Fujitsu in Japan specifically for Habitat II and it looked like a near future version of a Japanese city. This became known as Elysium and it was specifically designed with ease of use in mind and with a view that it should be simple for adults and children alike to navigate. Later on, a second Habitat II world was established named Graceville. Graceville was a copy of WorldsAway's Dreamscape and used the 2.x client and server architecture, whilst Elysium remained using the 1.x client and server. Both Elysium and Graceville were set on the island of Intercosm, with Elysium being on its southern tip.